Welcome! This guide focuses on useful sources for the study of classical and contemporary Arabic literature. It is tailored to the courses offered by the McGill Institute of Islamic Studies.

Al-Karmal (الكرمل), the Carmel cultural Foundation magazine was first published in 1981 by the famous poet Mahmud Darwish (1941-2008). Since then, it has been offering a platform for cultural and literary exchanges between the Arab World and the rest of the World. Al-Karmal discontinued in 2009 and published again under the new title of Al-Karmal Al-Jadeed (الكرمل الجديد) for two years of 2011 and 2012. Electronic resource.

The Archive alsharekh of Arab literary and cultural magazines (أرشيف الشارخ للمجلات الادبية والثقافية العربية) is an online archive of various resources such as journals, books, and articles from all over the Arab World. 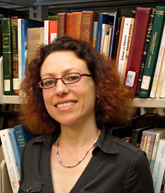