Strategies and technologies for transitioning from face-to-face teaching to online environments (#eLkit).

This section covers games and gamification, the application of game elements and design thinking in different contexts.

Games have tremendous power to motivate us to act and to incite change. Games have four basic characteristics: a goal, rules, a feedback system, and voluntary participation (McGonigal, 2012). They can be for entertainment purposes or they can be serious games, like educational games. Library games can be considered a subset of educational games. Find examples under library games.

Gamification, as defined by Deterding et al. in 2011, is the use of game design elements in non-game contexts. The goal is to harness some of the immense power of games to solve problems and impact real life.

I highly recommend the open Gamification course on Coursera, offered by Kevin Werbach from the University of Pennsylvania. It provides an excellent overview of gamification and games and introduces a framework that offers practical advice for first time gamifiers.

There is no right way of representing game elements out there, although game developers have put together comprehensive lists. The best known are from the Gamification Wiki which includes a list of game mechanics (under construction) and SCVNGR's secret game mechanics playdeck. There are several different characterizations of game elements here to explore.

Many educators employ what is known as PBL gamification in order to improve student engagement and motivation. Adding points, badges, and leaderboards is not necessarily easy to do, but they have the benefit of well-known resources and growing support networks. There is more information here on these elements but I encourage you to read further and to consider other approaches as well.

Points can be gained through experience and skill development, allowing players to move through game levels. In this way, they provide feedback and show individual progress. Points also allow players to be ranked, revealing top scorers and overall winners. They can be made to be redeemable for resources, either virtual goods or real world rewards. If scoring is the only gamification added to a learning object or activity, it can be accused of being 'pointsification' in contrast to using gamification in a more meaningful way (Kotini & Tzelepi, 2015). Pointsification is often used synonymously with bad gamification.

Badges can be used as rewards to be unlocked by one or a group of activities, as feedback on achievements, and to convey status. Social badges can be established for students that engage in activities to help others. For example, they can be awarded badges for posting and commenting, asking great questions and providing answers to their peers (Muilenburg & Berge, 2016).

Badges are interesting because they can be used, not just as rewards, but also as credentials. They can represent skills and accomplishments from learning experiences online, linking back to authenticated information about requirements from granting institutions. With Mozzilla Open Badges you can verify that a badge was issued and obtain information on the assessment criteria, allowing students to communicate successes and build reputation and identity (Ostashewski & Reid 2015). Unfortunately, the overuse of lightweight badges, assigned for small things like attendance and participation, has had an impact on the general impression of badges and their effectiveness (Muilenburg & Berge, 2016).

Advice from Voogt et al. on implementing badges includes getting buy-in from your organization from the onset, keeping the branding consistent, and implementing effective design principles, such as the use of a hierarchical badge structure and the addition of expiration dates to badges (2016).

Also known as scoreboards, leaderboards show a player's or a team's rank, either in the system as a whole (absolute ranking), or compared to others of a similar level (relative ranking). Pseudonyms may be used to provide anonymity.

According to Gabe Zichermann in his Google Tech Talk, Fun is Future, old school leaderboards that show you the best players overall are demotivating for those that are not in the top 20. It is better to show an individual their ranking as a middle position, with two players higher and two lower. This makes it easier to understand what must be done to move ahead, especially for new players that may deem it impossible to reach the top of a leaderboard from the start.

The use of leaderboards in a course can improve time on task, such as time spent engaging in learning activities (Landers & Landers, 2014; Landers et al., 2015). However, Dominguez et al. believe that it may be more beneficial to introduce cooperative and social mechanisms, since leaderboards can discourage those students that do not find it fun to compete for a rank (2013).

Werbach's pyramid has dynamics on top (big picture aspects), mechanics in the middle (elements that move the action forward), and components on the bottom (specific instances of mechanics and dynamics).

The number of elements widens as you move down the pyramid:

For example, if I want to achieve the 'progression' dynamic, I might select the mechanics 'challenges' and 'feedback' along with several components, such as 'levels', 'boss fights' and 'achievements'.

Chang & Wei designed a concept map of all gamification mechanics in MOOCs (2016, Figure 2), which they divided into learner-content, learner-learner, and learner-instructor interactions. The map is extensive and can be used as a tool for gamifying any size of course or learning object.

Stott & Neustaedter (2013) identified the game elements that were most successful in educational environments as:

There is conflicting information in the literature on the impact of gamification on student engagement and motivation and the achievement of learning outcomes. Gamification may only be having a positive effect on some users for a short time, providing a novelty effect that can wear off in the long run (Hamari et al., 2014). Unfortunately, the results are dependent on the context and the players, which means that more research is necessary.

There is also much controversy over the use of rewards in gamification and the long term negative effects they may have on intrinsic motivation (Kim, 2015; Nicholson, 2015). The concern is that extrinsic rewards can undermine a player's intrinsic motivation to do something. Behaviours will stop when rewards are removed and players will end up less motivated than they were at the start.

How do we achieve meaningful gamification? First, just like gaming, it is important that engaging with gamified elements is voluntary. Not everyone cares about things like points and leaderboards and these elements can be discouraging or demotivating. Next is to take a lesson from self-determination theory of motivation and create student-focused activities that fulfill needs for competence, autonomy, and relatedness (connected to something beyond yourself) (Tan & Hew, 2016). When these three motivators are engaged, an activity will be intrinsically worthwhile.

I created this concept map to organize game elements by the three characteristics of intrinsic motivation under self-determination theory. Click on the map to visit the full, up to date version. 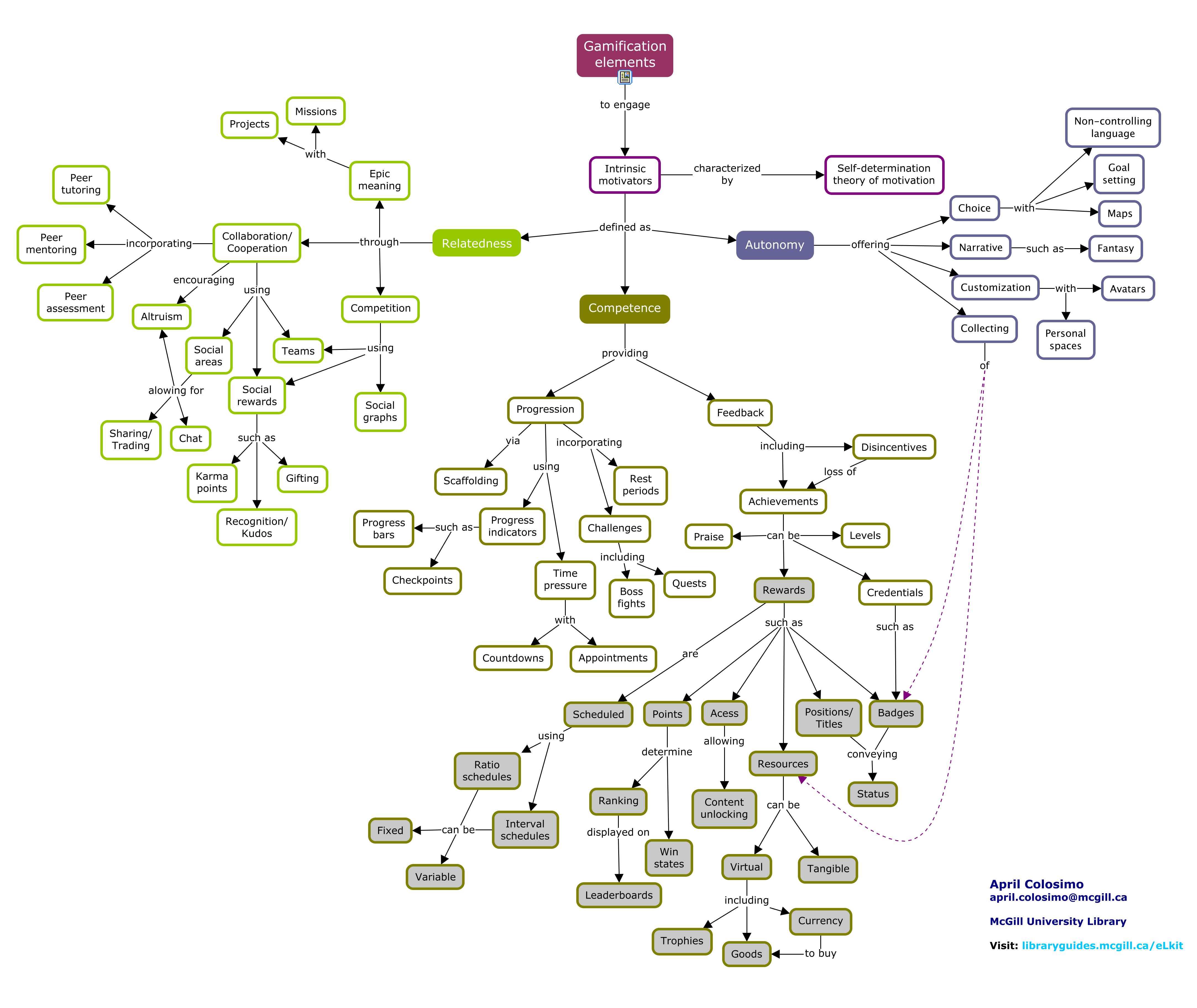 There are times when it may be beneficial to use rewards (Kim, 2015; Nicholson, 2015). For example, with one-time activities when the goal is for immediate and short-term behavioural change, or for boring tasks that players are not likely to do otherwise. Rewards that are not contingent on the successful completion of tasks can also be implemented, such as surprise rewards or lotteries. Performance-contingent rewards that are informational and not controlling can be used without compromising intrinsic motivation. See research instruments below for a tool to measure intrinsic motivation.

As Werbach describes in his Coursera course, there is more to gamification than reusing game elements. Rather, it is some combination of game elements and design techniques. Certain techniques or principles are specific to games but others would be considered as already core to education, such as feedback and progression (also known as scaffolding) (Dicheva et al., 2015).

Bottom of the page bonus (video): Sight: A short film set in a future where contact lenses have replaced computers and smartphones (2012).

McGonigal, J. (2012). Reality is broken: Why games make us better and how they can change the world. London: Vintage.